The world of finance is vast and ever-expanding. In such a space, it can often be hard to make a mark. But Cathie Wood is a name simultaneous to success in the investment industry! With ARK’s Invests great success, her rigor and hard work have landed her on Forbes’s “America’s Self-Made Women” list of 2020. Born to immigrant parents, Wood’s story is an inspiration to many who may seem to get overwhelmed by the complexities of the world of finance.

With four decades of experience in the world of finance and investment, Cathie Wood’s stock Portfolio is a remarkable one portraying her deep understanding of the financial markets.

Read More: What Companies Does Coca Cola Own 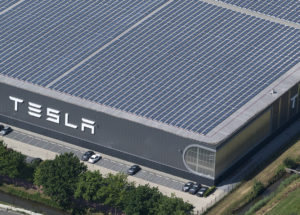 Cathie Wood’s current stock portfolio is made up of 8% Tesla shares with $5.79 Million.

Cathie Wood’s support for Tesla is no surprise. Her shocking statement predicting the company’s future stock price sent the finance world in a ripple. Tesla, with its tremendous innovation in the electric vehicle and clean energy department, is one of the most successful companies to invest in. Based in Palo Alto, California, the company’s main product line includes electric cars, battery energy storage, solar panels, and other products related to clean energy. Its founder is the notorious Elon Musk.

Roku Inc shares make up 5.3%, with $5 million of her Portfolio

Second on Cathie Wood’s investments and holdings is Roku Inc. Roku is another company based in California in San Jose. Roku is a publicly traded company. It also has an advertising business and provides licensed hardware and software to different companies.

Also located in California, Sqaure Inc is an American financial service and digital payment platform. The company was founded in 2009. It launched its first platform almost a decade ago, in 2010. The company went public in 2015 and is traded on the New York Exchange. The co-founder Jack Dorsey is also a co-founder of Twitter! As of 2020, the company has 5,477 employees and a revenue stream of approximately 9500 million US dollars.

Teladoc Health Inc is a modern take on medicine. It’s a virtual healthcare and telecommunication company. It provides medical information and distribution of medical aid through electronic means. Its main services include telehealth and medical opinions. It provides these services through telephones, videoconference calls, and mobile apps. Currently, the company makes up 3.6% of its stock investments.

CRISPR Therapeutic AG is an American-Swiss biotechnology company that produces drugs for medicinal purposes. The company’s headquarters are in Zug, Switzerland. Its number on the portfolio with a share of 3.4%. in 2019, the company’s revenues were roughly 290 million US dollars with 304 employees.

Invitae Corp makes up 2.4% of Cathie Wood’s Portfolio. It is also a medical company that focuses on medical genetic testing.

Zillow is an online platform that provides real estate services. Rich Barton and Lloyd Frink, both ex-Microsoft executives, founded the company in 2006. Barton is also the CEO of Zillow currently. The company was incorporated in 2004 and in 2006, the website was launched officially. The company makes up 2.3% of her portfolio.

Pure Storage Inc is an American company that is publicly traded. It is a technology company that develops all-flash data storage for hardware and software products. The company came into being in 2009 and produced its products in stealth mode until 2011. The company has seen tremendous success since its inception and currently makes up 2.3% of Ark Invest Portfolio of Cathie Wood.

Last but not least in this biotechnology company was born in 2004. Pacific Biosciences of California Inc develops and manufactures systems for gene sequencing and other biological observations. The company classifies its platform as single-molecule real-time sequencing (SMRT). The portfolio consists of 2.2% shares from Pacific Biosciences of California Inc.

So these are the top 10 holdings in Cathie Woods Portfolio. As can be noticed, Wood invests in a pattern. Most of her investments are in biotechnological and biopharmaceutical companies. Other than that, Wood has invested in technological and financial services. All of these companies are very futuristic in their approach and are catering to modern times. They are all highly innovative and pushing towards a technologically advanced future. Moreover, with the pandemic on hand, the investments in biotechnology would be a positive for her in the foreseeable future. 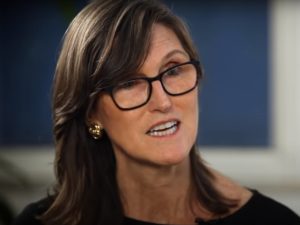 Her current net worth comes out to be around $250 million.

Cathie makes her millions by her stocks and by working as a CEO in her investment management company called “Ark Invest”.

Cathie Wood was born in Los Angeles, California. Her parents immigrated to the United States for a better life for their family. Her father’s interest in details rubbed on Wood from a very young age. He was always pushing his daughter’s curiosity, encouraging him to find a connection between things.

Wood is a mother to three children; Caitlin, Caroline, and Robert. She was married to Robert Wood and got divorced later. He died in 2018.

Woods’s religious beliefs are Christianity. She is a devout Christian. Politically, she is inclined towards republicanism and rooted for Donald Trump’s reelection in 2020. She has also supported women’s education, giving thousands away in supporting their schooling.

With a reference from Arthur Laffer, wood landed her first job in 1977 at Capital Group. She was an assistant economist and held onto the company for three years. After leaving Capital Group, Wood moved to the city of dreams, New York City. In 1980 she was hired by Jennison Associates. At this firm, she worked in various roles, from a chief economist, analyst, portfolio manager to a managing director. Wood gave 18 years of her life to Jennison Associates.

In 1998, Woods set up on a journey to starting her own hedge fund. She co-startedTupelo Capital Management, a New York City-based hedge fund, and joining Alliance Bernstein in 2001. She worked as the chief investment officer of global thematic strategies, managing five billion dollars. She was part of the company during the financial crises of 2007-2008 and was heavily criticized for performing poorer than the overall market. In 2014, when Alliance Bernstein rejected Woods’s idea for exchange-traded funds for disruptive innovation as being too risky, she left the company.

The same year, Wood founded Ark Invest. The Bible that she was reading at the time inspired the name. Ark got its first four ETF Funds from Bill Hwang of Achegos Capital.

In 2020, Mathew A. Winkler, editor-in-chief at Bloomberg News named Wood as the best stock picker. Wood has a reputation for making wild predictions. In 2018, she stated that she believed Teslas stock price could increase by 1100% in five years, to a price of 4000 dollars. She took this back the same year when the company’s stock instead dropped by 29%. Although Wood received a lot of criticism for this statement, Tesla’s stock price did reach the mark in January 2021. Wood also has made a favorable prediction for the bitcoin, stating that its price could read %500,000!

Cathie Woods’s story is an inspiration for so many. Unlike so many in the financial world, she started from scrap with no family background or footing in the world of finance. She is completely self-made! Her determination and passion have proved her success. Woods isn’t afraid to take risks and who knows, her latest predictions regarding bitcoins may be the truth of the future! So watch out for this boss woman who is taking the financial world by astride!